It is good to see Gordon Hempton and the One Square Inch of Silence project  getting some coverage. Hempton’s book is much the best of the series of search-for-silence books which have appeared in recent years, and which tend to find that silence is impossible to find, and more specifically that a respite from human generated industrial noise is impossible to find.

Many of these take refuge in a certain clever nihilism – a how-I-learned-to-stop-worrying-and-love-the-noise approach. Hempton’s book articulated an approach to silence rooted in what can best be called love. The author of the Crosscut article linked to above makes a point of registering her slight discomfort at the religious language Hempton uses at times to discuss his work.

This slight touchiness about anything smacking of the spiritual could be unfortunate (although in fairness the author is won over by Hempton’s enthusiasm) if it blinds to the power of Hempton’s vision. Perhaps the contrast with the other, relatively bland, search-for-silence books indicates that something akin to an evangelical approach is needed to jolt readers out of a certain complacency.

One Square Inch of Silence (the book rather than the square inch) is a discursive read. Normally I am somewhat resistant to over inclusive narrations including the kind of accomodation the author stayed in and their various personal issues. However in Hempton’s book, the apparent digressions actually serve to ground the book in a hyper-particularity which is consonant with his sonic mission. He also brings, initially, his teenage daughter Abbie for what is intended to be a reconnecting experience; this does not quite pan out and Abbie leaves her portion of the trip early. In a polished narrative, there would be some kind of overly pat resolution to this, with Abbie re-appearing towards the end for a shared father-daughter moment of silence. This doesn’t happen; Hempton does not overuse the incident either to illustrate something about intergenerational attitudes to silence or to engineer some kind of fake twist.

It is important to note that Hempton is not a foe of sound and noise per se. Some of the most lyrical passages are on the various sounds of railroads, and he recalls his own attendance at loud rock concerts with affection. There are also some unexpected revelations such as his love of bird song but lack of interest in knowing precisely which birds are singing (although he evidently has a deep ornithological knowledge) His book does function, however, as a startling insight into how much -and how loud – noises intrudes in our lives, and on the lives of nature. Hempton cites numerous studies on the impact of noise on animal breeding and on a natural world that did not evolve in concert with mechanical (or reproduced) noise 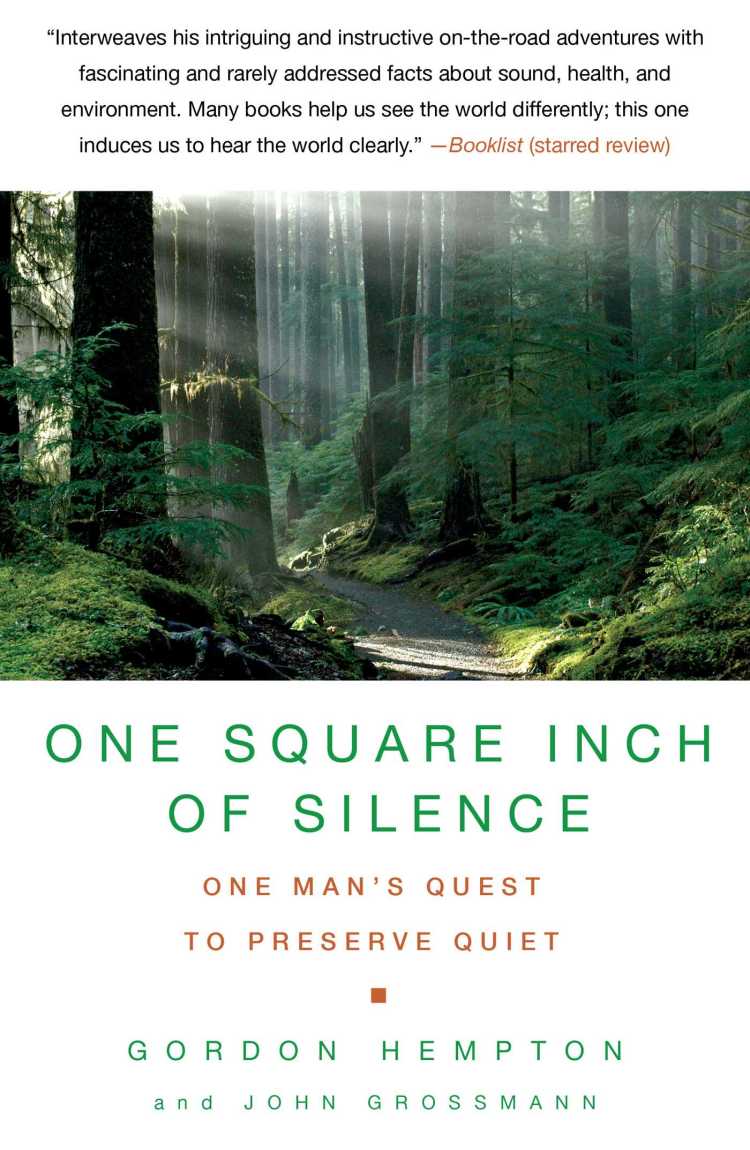 Flight noise is one of Hempton’s bete noires – in fact his main bete noire – and an appendix to the book contains an email exchange with the writer James Fallows who had written an article on seeing America from the air. Hempton is persistent in trying to engage with governmental agencies – state, local and federal – to try and have the importance of sound and silence recognised.

The One Square Inch of Silence concept itself (which is an independent initiative of Hempton, unsupported by Olympic National Park where the One Square Inch is located) is a resonant one with a hidden expansion of meaning. To maintain a square inch of silence in fact requires many many square miles of silence, free of mechanical noise but most especially flight noise. Therefore a single square inch of silence presupposes a much greater range of relative silence.

Hempton’s own reflections on silence – on various forms of silence, and on the contexts of silence – are more satisfying to me than the various academic philosophy approaches I have come across. I read One Square Inch of Silence via Scribd and cannot at this moment find the quotes I particularly would highlight, although some are online:

Silence is not the absence of something but the presence of everything . . . It is the presence of time, undisturbed. It can be felt within the chest. Silence nurtures our nature, our human nature, and lets us know who we are. Left with a more receptive mind and a more attuned ear, we become better listeners not only to nature but to each other. Silence can be carried like embers from a fire. Silence can be found, and silence can find you. Silence can be lost and also recovered. But silence cannot be imagined, although most people think so. To experience the soul-swelling wonder of silence, you must hear it.

Of course, some will object to the value-laden language here – “human nature”, “more receptive mind”, “more attuned ear” – and the unapologetic embodied nature of the argument – “felt within the chest” etc. This is perhaps the point, and perhaps why Hempton has more impact than more academic approaches with a certain timidity about anything that might smack of the value-laden (maybe this is analogous to the fear of seeming anthropromorphic) We experience sound and silence as embodied beings, and any consideration of them must face that fact.

Some of my own posts on the general theme of silence:

A Question of Silence: review of “Berberian Sound Studio” and “The Numbers Station”, Nthposition, early 2014

Another note on whales and silence from Tim Severin

An eerie silence in the garden.

Hesuchia – “we strive in order to be at rest”