Living in South Tipperary, the proximity of the a plethora of high crosses naturally piques ones interest. Some are well known, such as the Ahenny Crosses, some such as that at Kilkieran less so.

Before moving here I was more familiar with the taller, more monumental Monasterboice cross and those of that group. I found Oliver Crilly’s book on high crosses very helpful; but there is a vast literature on the subject, the surface of which I have scratched.

In this scratching I came across an interesting reference to one of the Twentieth Century’s most extraordinary men, Joseph Needham – who amongst other things is a towering figure in the history of technology and science. As the Guardian review of Simon Winchester’s book on him begins:

Joseph Needham is one of those extraordinary characters whose life was so large and sprawling that it needs first to be condensed into a list. He was a scientist, polyglot, traveller, diplomat, Christian, socialist, exponent of free love, nudist, morris dancer and Sinophile.

In reading a paper by Peter Harbison, A High Cross Base from the Rock of Cashel and a Historical Reconsideration of the’Ahenny Group’ of Crosses, I came across the following

The chariot on the north side of the Ahenny base (Pl. IX) provides us with
some totally independent dating evidence from an unexpected quarter which
would also point to the ninth century. Needham (29) pointed out that the Ahenny
chariot is pulled by two horses wearing a breast-harness, a Chinese invention
which was introduced into Europe in order to give horses easier traction power,
rather than having them choked by the neck-harness previously in use. Basing
himself on E. M. Jope’s eighth-century dating, Needham saw the Ahenny cross as being the earliest reliable European evidence for the breast-harness, all the other examples which he encountered being no earlier than the ninth century. But as we would expect an innovation introduced from China to be found first on the European continent before it reached Ireland, we could confidently presume that the Ahenny breast-harness was no earlier than the Continental examples,thus arguing for a date not too early in the ninth century for the Ahenny cross.

So my daily commute intersects (nearly) with the path of one of the most remarkable scholars of the last hundred years. Did Needham himself visit Ahenny?

I have found taking decent photos of High Crosses beyond my capacities as a smart phone photographer. Here’s an image of the North Cross base taken from this page on the UCC website: 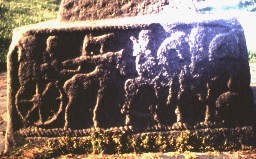 The Needham reference is to: Joseph Needham, Science and civilisation in China, vol. 4. Physics and physical technology, part II, mechanical engineering (Cambridge, 1965), 315 – and the full reference for the Harbison paper is  A High Cross Base from the Rock of Cashel and a Historical Reconsideration of the’Ahenny Group’ of Crosses, pp 13-14  Proceedings of the Royal Irish Academy. Section C: Archaeology, Celtic Studies,History, Linguistics, Literature, Vol. 93C, No. 1 (1993), pp. 1-20