Nuclear angst was a staple for those who were old enough to be aware of the oft-trumpeted apocalyptic threat in the 1980s. In the 1990s it became a lot less real, and even the current revival of Coldish War between the USA and Russia has not, it seems, made the nuclear nightmare quite as vivid as it was. In the previous post I resurrected my review of Stephen Walker’s “Shockwave” about the Hiroshima bomb and the events leading up to it.All the undeniable technical and logistical brilliance ultimately came down to the dealing out of terrible deaths by the thousand. “100 Suns” was an even more vivid illustration of the reality of nuclear weapons. There is an absorbing gallery of the images at Michael Light’s Site 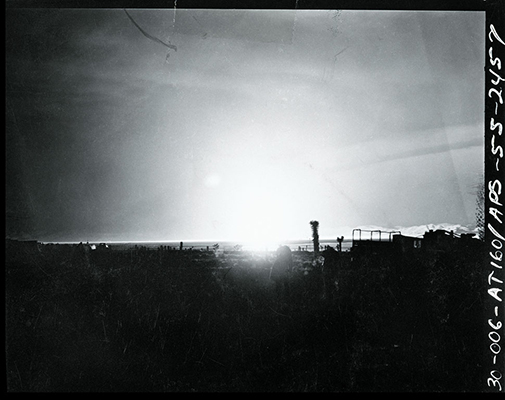 “Nagasaki destroyed by the magic of science is the nearest man has yet approached to the realization of dreams that even during the safe immobility of sleep are accustomed to develop into nightmares of anxiety.” – JG Ballard, The Terminal Beach

San Francisco photographer Michael Light has assembled 100 photographs of United States atmospheric nuclear tests in the Nevada desert and various atolls in the Pacific from 1945 to the relocation of such tests underground in 1962. Many of these images have been until recently classified. The title comes from Robert Oppenheimer’s quote from the Bhagavad Gita, on seeing the successful test of ‘Trinity’ in June 1945: “If the radiance of a thousand suns were to burst forth at once in the sky, that would be like the splendour of the Mighty One… I am become Death, the destroyer of worlds.” Oppenheimer could have evoked Yeats’ “a terrible beauty is born”, for “terrible beauty” is the term for these majestic images of barimaginable destructive power. 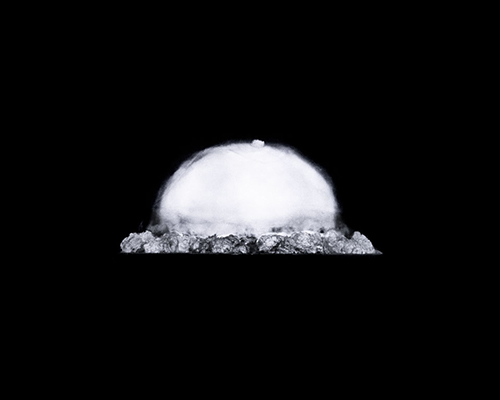 There’s something about the scale of the destruction wrought by nuclear weapons that beggars the imaginative faculty. The beauty of 100 Suns is a numbing one, image after image of gigantic explosions, of fierce red sunsets that promise apocalypse. The mushroom cloud was naturally co-opted by Andy Warhol for one of his silkscreen reproductions of mass-produced images of disaster, 1965’s ‘Atomic Bomb’. The images in 100 Suns resensitise; this is a glimpse into the inferno, the blood-red sunrises and sunsets of the Pacific tests teaser trailers for the last day of human life. We realise again what nuclear weapons mean.

The most incredible images are those in which human beings share the frame with the fireworks; the US military wanted to assess the ability of combat troops to carry out operations in the immediate aftermath of a nuclear strike – thus an initially banal image of helicopters flying towards the horizon takes on new significance once one realises that they are flying towards the debris cloud of a nuclear explosion. We see troops huddle in trenches, showered by sparks from the detonation of ‘Simon’ before “ground and air shockwaves will toss them like dolls, then fill their mouths with radioactive dust.” We see strange, almost bleached images of military brass viewing, clad in eerie protective goggles. Another image simply shows five GIs staring open-mouthed at the ‘Dog’ test – significantly the only named individuals to appear in the photos. Light’s selection manages the seemingly impossible – humanising the moment of nuclear detonation.

Most of the images were taken by the Air Force 1352nd Photographic Group based at Lookout Mountain Station, a secret Hollywood facility which utilised the latest photographic technology for the military. The scale of Lookout Mountain’s activity can be appreciated by the fact that 1946’s ‘Baker’ test at Bikini Atoll was filmed and photographed to such a degree that a world wide shortage of film stock ensued for a number of months.

The tests were given bland – ‘Stokes’, ‘Hood’, ‘Sequoia’ – or facetious – ‘Little Feller’ – names, (and why have military operations now been given names like ‘Operation Enduring Freedom’, as opposed to the cryptic domestic objects and fauna of yesteryear?) almost comically at variance with the literally apocalyptic seriousness of the operation.

Light’s closing essay and concluding captions for each photo ain much fascinating, terrible information. Phrases like “an explosion greater than all those of World Wars I and II combined” recur with numbing frequency. In their dry way, with their litany of desert towns ravaged by tumours, islanders relocated and official deceit and denial at every turn, the captions illuminate the lunacy that surrounded the whole nuclear enterprise. The victims of nuclear testing – the town of St George, Utah; the still uninhabitable Bikini Atoll; the Japanese trawler Daigo Fukuryu Maru; John Wayne, Susan Hayward and other members of the cast and crew of The Conqueror – their fate is one which once (and now again?) seemed to threaten us all.

Of course, there would be a place for a Soviet and indeed Chinese 100 Suns, with their own catalogues of casualties and cover-ups. The publicity material for the book claims “one of the virtues of the book is its emphasis on data not on argument”, implying that this in a way a sober, “value-free” presentation of images. This is true up to a point; there are no rending images of Hiroshima or Nagasaki, Light’s essay is sober and powerful, and concludes with the fervent and (I would hope) incontestable invocation: “May no further nuclear detonation photographs be made, ever.” However, it can hardly be a coincidence that the chronology that concludes the book includes the accession of George W Bush, and that of no other President. Not when the chronology later observes, in its entry on the February 2002 publication of the Nuclear Posture Review, that “not since the first term of the Reagan Administration are nuclear weapons so emphasised in US defensive strategy”

And of course merely presenting these images, without any comment of any kind is a far from “value-free” act. This is the reality of nuclear testing. Light observes that the transfer of testing underground brought cultural invisibility and secrecy. “Photographs only tell us about the surface of things, about how things look. When it’s all we have, however, it’s enough to help understanding. It exists. It happened. It is happening.”