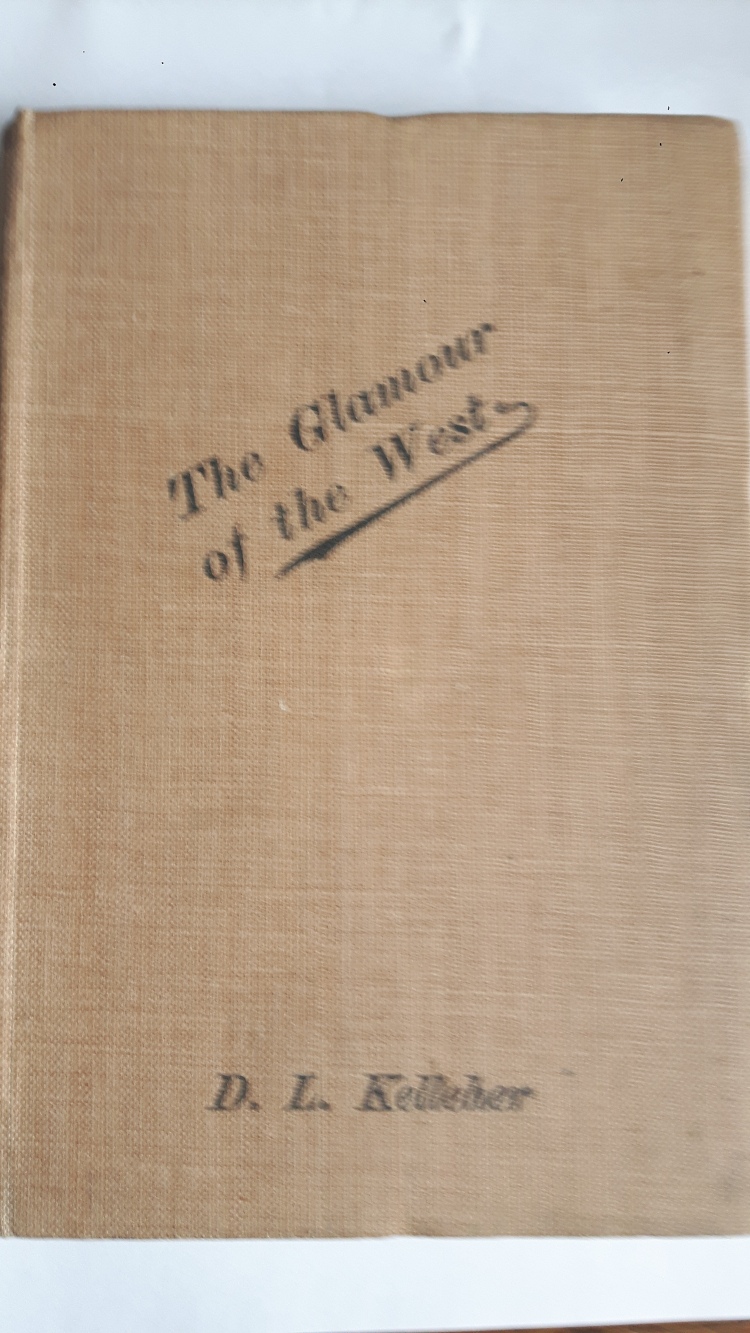 The Glamour of the West seems to be part of a series by D L Kelleher, following on from The Glamour of Dublin and The Glamour of Cork. Kelleher is an obscure figure now. Here is his bio from The Concise Oxford Companion to Irish Literature:

The Glamour of the West doesn’t even make this concise list. It is a collection of very brief sketches, the longest a couple of pages. The subtitle, “Bantry Bay to Lough Foyle”, gives a sense of the geographic range, although at times Kelleher veers quite far east (to Anthony Trollope in Banagher and Maria Edgesworth in Edgesworthstown).

Kelleher’s tone is set from the outset, in a “Prelude”:

“The West’s Awake!” – Awake to what? To its own infinitely small knowledge of itself? That  is as much as one can say in answer.

He ends the Prelude thus:

So, in 1928, this brief book of resentment and hope, coloured with a little love, takes up a few of the threads, and as tenderly, cynically, or dispassionately as may be, for a moment resumes an old story.

Kelleher references “cynicism” quite a bit throughout. The tone of the book is often bantering, scathing  – but in a somewhat indirect way. It put in my mind of a fictional character, Sarah Devlin from J G Farrell’s wonderful novel Troubles  There is a sort of habit of mind that could no doubt be called post colonial in a later age; mindful of the the atrocities but also the slights inflicted on the Irish nation over the years, and complaining of these in a what could be called a passive aggressive tone. Perhaps most suggestively, there is little on the events of the prior decade which led to Irish independence (in part).

Some extracts may demonstrate this comparison – the reader can judge if it is apt or not.

“The 1847 Famine In Mayo” is perhaps a little more emotionally direct than other pieces. It begins with a consideration I have wondered about myself

In the year 1928, when this book is being put together, there are many thousands of living Irish people whose parents were born in or about the Famine times. No wonder, here and there, if a melancholia should appear in the Irish. A generation born around the famine year could not escape the famine complex. In the west especially, life turned black with the black blighted potato. Social historians discuss the incidence of hysteria, and worse, due to the Zeppelin nights in London. The long duresse of the famine of 1847 was deeper shock to the whole population than any number of night-raids. Death might ensue from a bomb, but despair and death both were surer in Ireland. In Mayo the tragedy was at its height. At Westport workhouse, built to hold one thousand inmates, three thousand clamoured for entrance sometimes in a single day. Yet the pride of the Irish poor if well known; they will only enter the poorhouse when ruined and hopeless. The gate of the workhouse would be closed and barred early. Then the desperate, weak, lonely, agonised outcasts would throw themselves down to rest and snatch a sleep at the foot of the wall on the opposite side of the road. As many as seven corpses were found one morning like that, dead where they lay.

“Long duresse” is in the original. I did wonder originally was it a reference to the longue durée  concept of historians of the French Annales School, but this was many years before. “Duresse” must be related to “duress” and mean suffering.

Here is another characteristic extract –  about a man from my father’s part of the country:

A very old man, eighty-five, perhaps more, came into the town of Dunflin, Co. Sligo, one day in 1670 on his way to Dublin. The jolting of the rude two wheeled car, with only a layer of straw thrown down in it to soften the corner where you could sit, had tired him out. So he went to the tavern where he was known (for he had often passed that way) and asked for a bed for the night. He was given his old bed in the room above, and then he settled down by the fire in the kitchen to take a little drop of whiskey to revive him and to rest for a short while. There was a very nice girl serving drink to any that would come into the bar outside. But there was little custom and she came into the kitchen and stayed a long time talking to the old man, for she was a really nice girl and could appreciate him. They were pleasantly conversing when a loud clatter of feet was heard from the shop and a voice calling, “Come on here and fetch it out!

Hurrying from the kitchen the girl recognised the intruder as a well-known loyalist from near Dunflin. As soon as he saw the comely girl he put his hand around her, but she pulled herself away and stepped back into the kitchen where the old man had risen from his chair on hearing the confusion. The intruder followed her in and again trying to lay hold of the girl, said “Come on! Give me a kiss and you, you old —–, turn away!”

But the old man put himself between the girl and the soldier and defied him to touch her, for, as old as he was, he would strike “a foul fellow the like of you.’ The drunken soldier, blazing with insolence and disappointed passion, caught up a knife that was lying on the table and drove it into the old man’s heart and killed him with that blow.

That old man was Duald MacFirbis, once a rich scholar, who had spent his whole life compiling histories and genealogies. He was one of the true lovers of Ireland, keeping a hope for posterity by writing down the story of the heroic past. He did it in poverty and homelessness and now he had murder for his crown.

Here are some photos of the pages this story is recounted in: 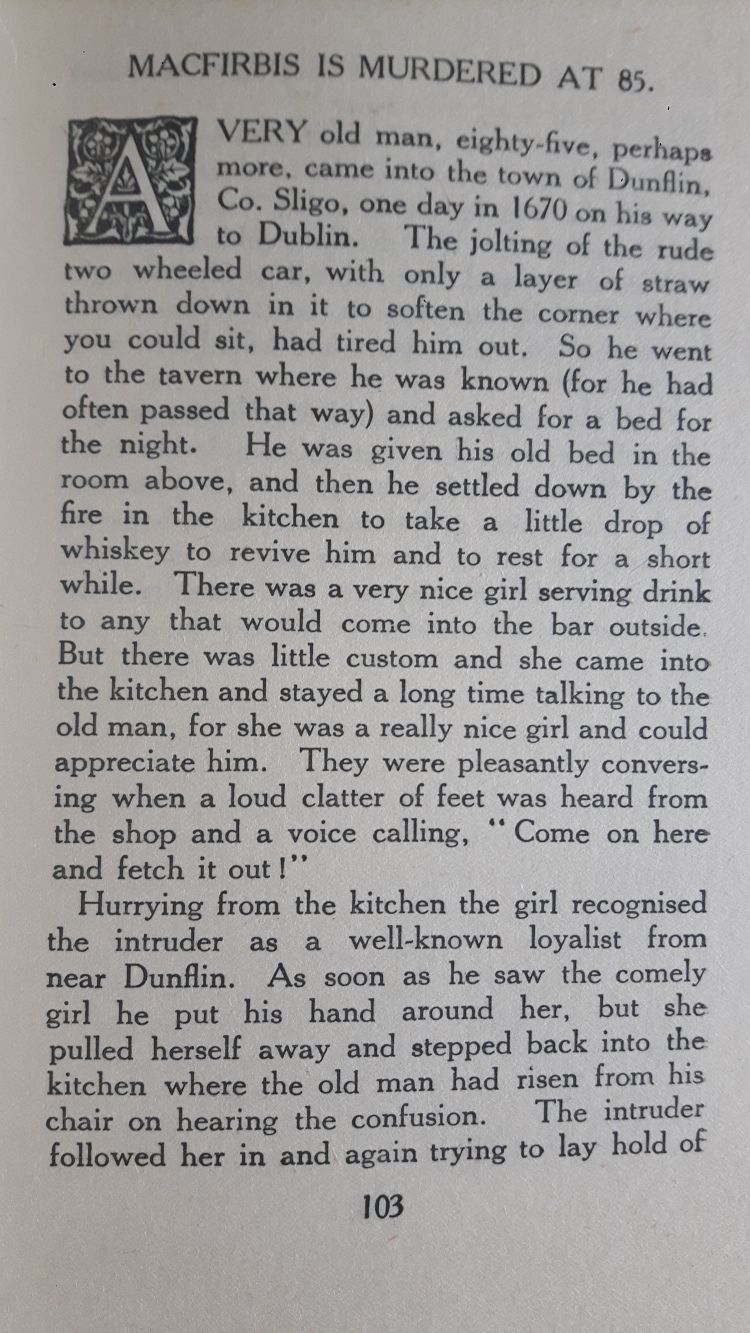 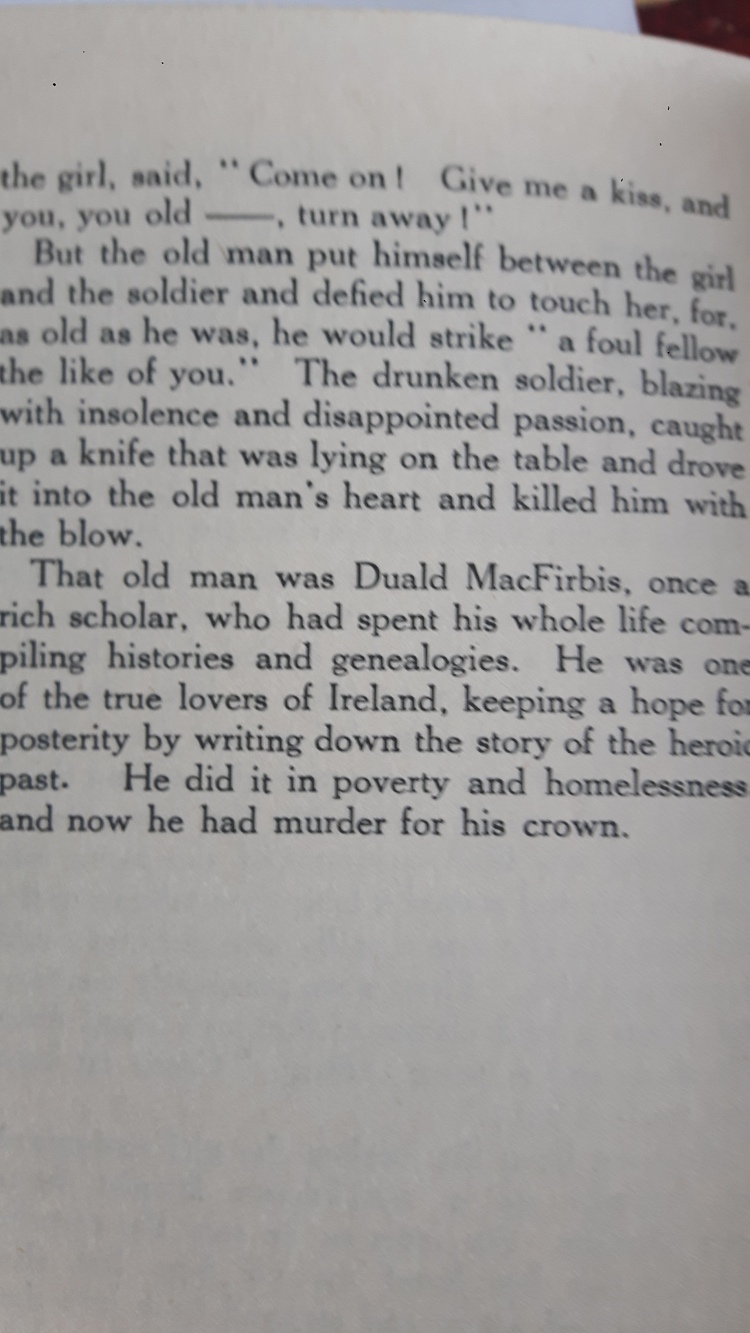 It is easy to mock this kind of thing, with references to comely girls and so on. Of course, as I often think, some day our prose will no doubt seem laughable. And the book is an at times nearly Borgesian in its laconic capturing of a person, a society, a nation through moments.

One more extract, and this one is actually in some ways the most characteristic:

PRIMROSES BY THE SEA

This is a personal chapter. It need not lose by that. It is about a trip we took by road from Sligo to Bundoran. It is really about a stop we made on the way when we ran past a desolate-looking harbour of refuge that the Congested Districts Board had made for fishermen, since gone to America. We were able to pass around the empty harbour to the edge of a cliff almost as unreclaimed as nature left it.

It was a day in mid-June when primroses rambled over the grass, and sea-pinks with them. Under the cliff the rocks cut into a smooth sea. The view extended almost to Donegal. There was no ship or boat or any sign of life except ourselves.

“I don’t know,” said the man who owned the car. “I came here once before and don’t know whether it is Leitrim or Sligo.”

“Is Leitrim on the coast?”

“It is – a couple of miles of it. But I think we are in Sligo. Leitrim is further on.”

We made tea on the sloping cliff side and watched the perfect solitude.

“Nothing ever happened here,” said my friend. “There is no glamour to write about.”

Nothing only primroses in mid-June, gold sands shining up through blue water, the smell of sea-wrack from the caves, the caress of soft aqueous air.

Glamour enough! Go there and see!