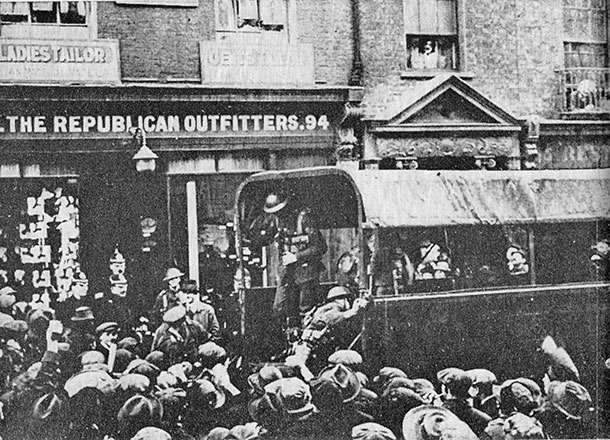 “Republican Outfitters” was a draper’s on Talbot Street, founded by Clare-born Peadar Clancy From the Wikipedia article on Clancy:

After his release, Peadar Clancy started a drapery business of his own, called The Republican Outfitters, which was located at 94 Talbot Street.[8] According to Dan Breen, it was one of the best-known meeting places in Dublin for the IRA, and was so closely watched that it was never advisable to remain there for long.[9] By 1917, it was advertising as The Republican Outfitters: Clancy, Brennan and Walsh.[10] Clancy’s initial partners in the business were Maurice Brennan, Thomas Walsh (who, like Clancy, had been in the Four Courts garrison at Easter 1916, had been sentenced to death, but was later reprieved) and other comrades.[11] By 1920, the initial partnership had been dissolved, Brennan and Walsh had gone out on their own at 5 Upper O’Connell Street (which was also used as a base by the Volunteers, with Walsh acting as intelligence officer of the 1st Battalion)[12] and Tom Hunter had become part proprietor of the Talbot Street business with Clancy.[13]

One wonders how many customers idly went into Republican Outfitters for a new suit.

Here we have a remarkable photograph that viscerally reminds us of the fundamental nature of war and conflict – Lt Gilbert Arthur Price seconds before his death in a gun battle at Republican Outfitters: 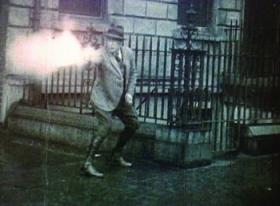 Or is it? It turns out that remarkable photographs, even then, often were remarkable for other reasons.

Here is some footage from “Irish Destiny“, the 1926 silent film from which the above photo is actually taken: