“Bóthar na Naomh and the Black Lane: Roadway of the Saints” is a booklet produced by the Whitechurch Historial Group. It describes itself as a “map and compendium” completed “to explore the historical routes Bóthar Na Naomh, and the Black Lane, and extend to include various interesting historical sites which lay between Lismore and Dungarvan.”These routes are associated with St Declan’s Way, from Ardmore (where St Declan brought Christianity before St Patrick did) to Cashel (last year, with some friends, I did this backwards from Cashel to The Vee)

Anyway, the booklet has much of great interest, but I was naturally most struck by this passage featuring the founder of Lismore, St Carthage:

At this location in Kilcloher it is regarded as being the site where St Carthage produced his miracle, whereby, the hosts of Carthage and his travelling monks were unable to provide much hospitality due their limited resources to this large group of unexpected visitors who came to stay; as they had only a few loaves of bread, fish and a barrell of beer. But, Carthage with this Barrel of Beer, performed the miracle of the ever flowing barrel of beer for the duration of the monks stay at Kilcloher church and onastic settlement, and after a few days of rest and reparation, the monks with St Carthage continued down the Bóthar Na Naomh towards their destination of Lios Mhór (Roundhill), following the encouragement from the Kilcloher monks. 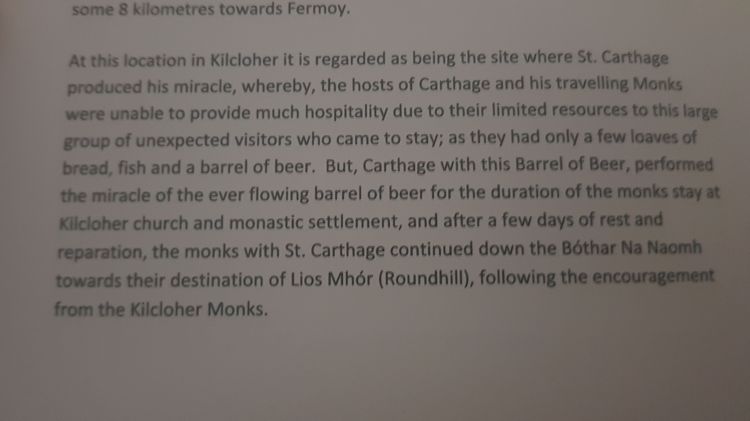