On Bastille Day 2005 this piece appeared on the Social Affairs Unit blog. The only chance, so far, I have had to deploy Frangere dum metuis, franges crystallina, peccant / Securae nimium solicitaeque manus. For those of you who don’t immediately know what it means, read on! 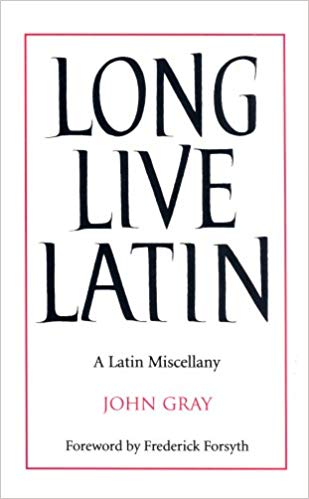 John Gray retired from the Bar in 1994. Faced with the onslaught against the use of legal Latin led by Lord Woolf, he decided to compile a volume of legal Latinisms. This was partly to prove the power and pithiness of Latin phrases, and partly to give trainee lawyers courage and confidence to connect with the rich heritage of their profession. While compiling the book, Gray found himself coming across lots of non-legal Latin, so to speak, which “reminded me of much that I knew, told me more of what I half knew and introduced me to a great deal that it was a joy to learn”.

Having completed Lawyer’s Latin, Gray decided to compile the deliciae Latinae he had encountered into this more general volume. It is a celebration of the power, precision, poetry and passion of the Latin language. In his foreword, Frederick Forsyth writes:

I was once told that Winston Churchill, emerging from Harrow with what today we would term no GCSEs, soon recognised his shortcomings and spent many hours as a young officer memorising a book of some 2000 Latin tags. With his awesome memory he never forgot one of them.

And there’s the rub. A recent book flatters my generation by being telling us our pop culture is, actually, smarter, wittier, more inventive than what has gone before. Computer games, movies and TV shows that endlessly refer to other movies and TV shows – far from being the products of decadence, they are claimed to be moulders of intelligence. Thus IQ scores are, apparently, steadily increasing. In some ways this is obviously true. What used to be called cartoons are now vastly more sophisticated. Compare the animated products of Pixar or, less impressively, Dreamworks, with even the most beloved “classic” Disney cartoon. Whether or not this sophistication is a good thing is, of course, a moot point.

I always enjoy reading Wired magazine, largely because of its delirious enthusiasm for anything remotely “futuristic” (how pleasingly old-fashioned), but there is something desperately sad about the suggestion in the byline to the Steven Johnson article straplined: “stop reading the great authors and start playing Grand Theft Auto”. Presumably Wired‘s tongue is very much in cheek.

Who, however, does not feel, contemplating the slow, melancholy retreat of Latin and Classical Greek, that we are losing something more than just these “dead” – in the sense of unspoken – languages? A way of looking at the world, a discipline, a rigour, the vertiginous sense that we can speak the exact words of Caesar, of Augustus, of Plato, of Marcus Aurelius. A conversation with the past that animated the Renaissance, that links us directly with scribes in monasteries devoting their lives to the preservation of a single text. Barbarism is more easily recognised than civilisation, and who does not feel in the death of Classics something of barbarism?

Gray’s book is enjoyable and enlightening – but reading it one is seized by a sense of sadness. It is a mini-repository of learning we once would have taken for granted. In today’s mediaverse, Latin phrases are not uncommonly quoted, but often in a debased, cant form. Here we have the two tags which will forever be associated with Juvenal – quis custodiet ipsos custodes and mens sana in corpore sano. Both are almost always cited divorced from their original context, and often with the most surprising intentions. Gray’s gloss on both is worth quoting in full – to give a flavour of the book, for one things, but also to illustrate how the quote out of context is just that – out of context, and therefore shorn of subtlety.

“Who is to guard the guardians themselves?” Juvenal vi 347-8. To the point if police corruption is in question. Juvenal’s concern however was with the reliability of guards placed upon a wife to thwart a lover. Knowledge of the fuller context of this famous piece may be salutary: “Pane seram, cohibe. Sed quis custodiet custodies? Cauta est ab illis incipit uxor.” Bolt her in, keep her in. But who is to guard the guards themselves? Your wife is careful and begins with them.

As for mens sana in corpore sano, often invoked by health promoters as the summum bonum:

“a sound mind in a sound body” Juvenal. X. 356. Something to be prayed for orandum est ut sit mens sana in corpore sano. But for some there may be something more to be desired. E.M. Forster wrote

“They (public schoolboys) go forth into a world … of whose richness and subtlety they have no conception. They go forth into it with well developed bodies, fairly developed minds and underdeveloped hearts.” Abinger Harvest 1936. “Notes of English Character.”I can’t help feeling that Gray missed a trick here, or perhaps I wish he hadn’t quoted from Forster’s impressive-sounding but ultimately tendentious and dogmatic essay. Towards the end of the tenth satire, on the futility of aspirations, having rejected as illusory the blandishments of earthly glory and dwelt on “the endless and bitter afflictions that always attend a long old age”, Juvenal tries to answer the question “Is there nothing, then that people should pray for?” Ideally:

If you want some advice,
You will let the heavenly powers themselves determine what blessings
Are most appropriate to us and best suit our condition;
For instead of what’s pleasant, the gods will always provide what’s fitting.

But if you must pray for something specific:

Still, that you may have something to ask for – some reason to offer
The holy sausages and innards of a little white pig in a chapel –
You ought to pray for a healthy mind in a healthy body.
Ask for a valiant heart which has balanced the fear of death,
Which looks upon length of days as one of the least of nature’s
Gifts, which is able to suffer every kind of hardship,
Is proof against anger, craves for nothing, and reckons the trials
And gruelling labours of Hercules as more desirable blessings
Than the amorous ease and the banquets and cushions of Sardanapallus.
Juvenal, The Satires, Trans. Niall Rudd.

Gray declaims academic expertise as a historian or Latinist, and no doubt there are inaccuracies and simplifications here and there which some readers may notice (I spotted a few). Nevertheless, he is a witty, wise and above all erudite guide to the territory.

The Latin ranges from famous lines from the Classical authors to inscriptions and more intimate correspondence, to medieval, church and even modern Latin. For instance, we read:

Readers have no doubt already spotted that this is from Harry Potter, or to be specific Harrius Potter et Philosophi Lapis, Peter Needham’s translation of one of J.K. Rowling’s wizardathons. Those readers whose Latin is not entirely in abeyance may like to try it as an exercise.

Here are even some phrases which might be suitable for purposes of seduction – Gray recommends et vera incessu patuit dea (“and in her walk it showed, she was in truth a goddess”) from Aenied Book I (line 445) as “perfect words for a young man of romantic disposition”. He links them with Byron’s She walks in beauty and the story of Agnes Bernauer. Discussing the word libinossima (“the most lusty [i.e. sexy] woman”) he asks “how many women would like to be so described?” A rhetorical question, surely.

Lord Woolf is not the only enemy of Latin. As Education Secretary, Charles Clarke infamously remarked that he didn’t see the point of the Classics, although he rapidly backtracked and later attacked the AQA’s decision to phase out Latin in 2006. The Treasury has apparently declared a fatwah on Latin phrases. Periodically, medical administrators and similar figures urge the abandonment of the many Latin phrases still used and understood in medicine. Prescriptions feature o.d., b.d., t.d.s., p.c. and other abbreviations directly derived from Latin. Medical notes feature mane, “in the morning”, and pro temps, “for the time being”, and these are universally understood. I have never heard a nurse, pharmacist or doctor or any other professional report incomprehension of these phrases – or any patient complain about their use. For a temperament like mine at least, the little Latin touches connecting us to a long vanished world are one of the small pleasures of the job.

As Gray points out, the universality and resonance of Latin is invariably abandoned in favour of clumsiness and chunkiness. “Law for free” is the inept suggestion made to replace pro bono after Lord Woolf’s plea for a “plain English substitute”. Officialdom everywhere, not just in the UK, has a tendency to imagine that changes in terminology can brush away inconvenient realities. It seems ludicrous to imagine that the intimidation many ordinary people feel when faced by the law or medicine has much to do with a few Latin tags.

Gray may decry the Woolf tendency, but he is primarily an enthusiast. His love for language is not confined to Latin. Poetry in English, French and German features throughout. These quotes at times support the message of a particular line, at times deny it. The book is stuffed with bits of Shakespeare, legal anecdotes, war poems from Brooke and Binyon to Owen and Sassoon, and (repeatedly) Chesterton’s Lepanto which Gray seems a particular partisan of (“nobody should depart this life without having read it … more than once”).

This is a consistently winning approach. For instance, discussing labor omnia vincit, anyone who cites Bertrand Russell’s line that “one of the symptoms of approaching nervous breakdown is the belief that one’s work is terribly important, and that to take a holiday would bring all kinds of disaster” is evidently fairly advanced in the wisdom stakes – if only Russell said more things nearly as sensible.

Recalling Forsyth’s Churchill anecdote, one can’t help feeling that this book will help fill a lacuna in so many of our educations – the classical heritage blithely dumped in the name of a misguided utilitarianism.

Perhaps my only real caveat is that one of my favourite Latin tags is missing – Martial’s Epigram 111 from Book XIV:

So long as you are afraid of breaking crystal cups, break them you will. Hands too careless and too anxious alike do amiss.
Martial, Epigrams, Vol 3, Trans – D.R. Shackleton Bailey.

What better way of expressing a great truth – that a too cautious approach to life is as destructive as a too reckless one?