by Séamus SweeneyPosted on September 1, 2018

I’ve been reading Pádraic Fogarty’s “Whittled Away: Ireland’s Vanishing Nature”. It’s a sobering read, puncturing the fond illusion that many Irish have that their homeland is some kind of environmental paradise, or even Not Bad relative to other countries. I’ve posted before on how species lost continues unabated – even accelerated – despite a belief this is a “greener” time than, say, thirty years ago. 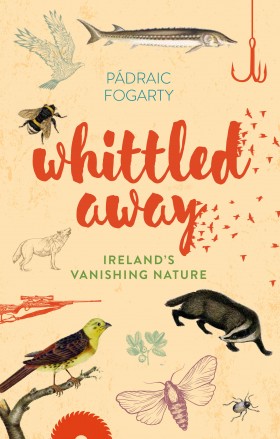 Fogarty’s section on Glenveagh, a place I know well, is saddening and maddening at the same time. The chapter “Extinct: Ireland’s Lost Species” is the starkest section. This systematically dismantles the myth of Green Ireland by giving example after example of species which have vanished at the hand of man.

For September, I intend to post a daily piece on an extinct species. This will not be systematic and I will end of leaning heavily on Fogarty, but let’s see how we get on.

“Extinct: Ireland’s Lost Species” begins with Fogarty contemplating a majestic fish from the River Liffey. It is, however, now a mounted specimen in the “Dead Zoo”, the Natural History Museum of Ireland on Merrion Square in Dublin. Taken from Poolbeg Fishery in 1890, and “purchased from Mr J G Powell (fishmonger) for ten shillings” In historical memory the sturgeon was a not uncommon Irish fish. Large, slow-maturing and long-lived, their population is vulnerable to environmental changes. Salmon netting likely did in for many sturgeons and sent the population into a precarious state.

During the twentieth century, sporadic reports of sturgeons [in Irish waters] surfaced here and there. In 1950 Robert Lloyd Prager wrote of the sturgeon that it was “not infrequently taken.” A 28kg specimen, a youngster given its size, was landed at Ardglass in County Down in 1966. Conservation not being part of the mindset of the time, it was dispatched there and then and a fibreglass cast is now on display in the Ulster Museum in Belfast. Also in 1966 a small specimen was landed in Dingle, County Kerry, and caused a stir in then President de Valera’s office and in far away Buckingham Palace where Queen Elizabeth politely declined delivery of what was still considered a ‘royal fish.’ In 1967 another was hauled up in a trawler off County Cork weighing 29kg. This is the last written record of a sturgeon I can find from Irish waters. What was once a reasonably common breeding species found around the Irish coast slipped noiselessly and without fanfare into extinction. It had most likely been overfished although changes to rivers from extensive drainage schemes may also have played a part. Long-lived and slow breeding is no match for regularly set drift nets.

The story of the 1966 Dingle sturgeon became a radio documentary:

The crowds gathered to see this unusual species. The fish was being kept alive on the deck of the boat, under wet sacks, until a photographer from The Kerryman came along to preserve the moment.

The sturgeon was a so-called ‘royal fish’, which meant that any sturgeon caught in Irish waters had to be given to the King or Queen. That was back in the 1400s when that edict was issued. In 1966, this was interpreted as meaning that the sturgeon should be given to the Head of State, President Eamon De Valera.

The Dingle fishermen contacted Áras an Uachtarán. Dev thanked them and asked that they give the sturgeon to the Poor Clare nuns in Kenmare. The nuns were delighted and prepared to have a feast with this unusual dish.

Back in Dingle, the photographer still hadn’t arrived. One young fisherman was standing beside the fish when he heard a crewman call, “Throw it out!”. He picked up the fish. Soon a few more in the crowd took up the cry, “Throw it out!” Of course, they meant, to throw the fish out onto the pier but, in a moment of distraction, he thought they meant he should throw it into the water. He did just that.

A groan and a roar went up from the crowd as fishermen scrambled in punts with nets and boathooks to try and find the fish. They had no luck – the fish was gone.

The nuns in Kenmare weren’t going to get their fish – the Dingle fishermen sent them a box of other fish instead.

Later that day, while one punt was still trawling the harbour in the hope of catching the sturgeon, another fishing-boat came into the harbour. Amazingly, this one had a sturgeon too. Not as big, but still, a sturgeon.

The day was saved, the fishermen’s promise to Dev would be fulfilled and the nuns would get their fish.

But that was not going to happen. The fisherman who caught the second sturgeon had been involved in republican activities and had been interned in The Curragh in the 1940s – by Dev. There was no way, Dev was going to get his sturgeon – whether he was giving it to the nuns or not.

Instead, this second sturgeon was sent to the fish market in Billingsgate in London where it fetched a fine price.

And that was that. Until about 10 years later when the republican fisherman was told what had ultimately happened his sturgeon.

The fish merchants in Billingsgate were purveyors of fish to Buckingham Palace and, the fish that didn’t go to Dev, it went to the British queen instead.