My September blog series Extinct in Ireland continues dolefully on. And here is a bird extinct as a breeding species in Ireland very much within recent memory: the Corn Bunting. 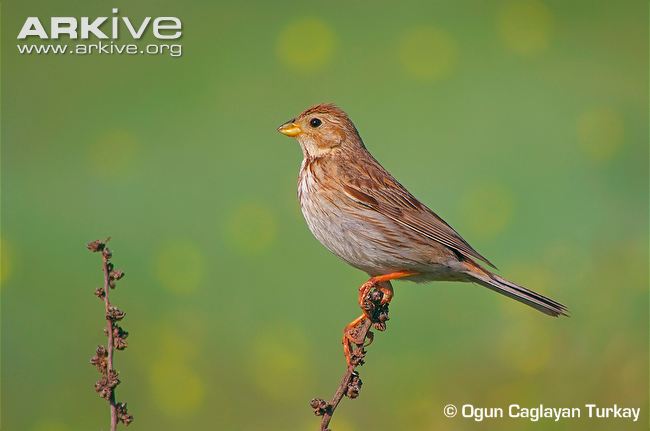 Status: Extinct as a breeding species in Ireland. Formerly a widespread resident in lowland agricultural areas.

Conservation Concern: The European population has been evaluated as Declining, due to a moderate recent decline.

Identification: Slightly larger than Reed Bunting , with larger and more conical bill. Unlike the other three bunting species breeding in Ireland, male and female Corn Buntings do not  have different plumages. Resembles juvenile Yellowhammer, having pale grey upperparts with some diffuse dark streaking. The underparts are off white with some indistinct grey streaking. Many birds have a small dark patch on the breast. Unlike Yellowhammer, Corn Buntings have a mainly pink bill.

Call: Rather quiet, the most frequently heard call is a short “tsit”. The song is very distinctive, accellerating series of notes – “tick tick zick-r-riss”. Males usually sing prominent perches, such as telephone wires or from the top of a hedge or tree.

Breeding: Breeds in agricultural areas in lowlands, preferring cereals and weedy sites. No longer breeds in Ireland, with the last recorded breeding taking place in the mid to late 1990’s in County Mayo. The decline is considered to be mainly due to changes in agricultural practices tat the time, such as decline cereal cultivation and more intensive growing of silage. Around 10,000 pairs still breed in Britain, though the population has been declining.

Wintering: Gathers in small flocks (10 to 50 birds) at feeding sites, such as stubble fields.

Where to See: Only likely to occur to as a vagrant to Ireland. The last Irish record is from Cape Clear in 2006. Any potential sightings, especially in possible breeding habitat should be immediately reported to BirdWatch Ireland. 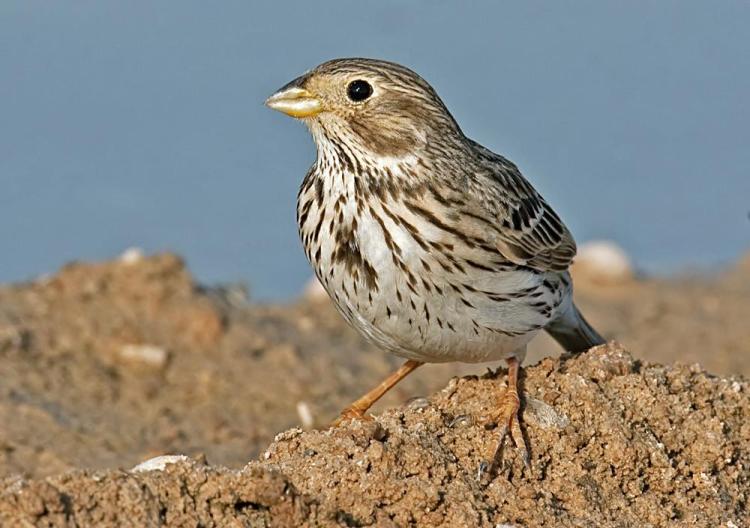 Here is a 2012 piece by Richard Collins on the Corn Bunting\:

The corn bunting, brown with dark stripes, is bigger than a sparrow. It’s not much to look at, but the jangling song evokes memories of sunny cornfields, threshing machines, balmy meadows and horse-drawn hay floats. Unusually for buntings, the sexes are alike. When territories are in short supply, the more successful males resort to polygamy. Grabbing up to three partners, they leave other would-be daddies without mates. Females reckon they are better off as the mistress of a male with a good territory than nesting monogamously with one of meagre resources. Having to share a husband doesn’t matter that much. He visits the ladies mainly for sex. Although keeping a watchful eye on the spouse while she builds the nest, he doesn’t raise a feather to help her. Nor, despite being well camouflaged, will he incubate the eggs. A largely absent father, he condescends to feed youngsters only when they’re close to fledging. Oddly, males with several wives tend to be more helpful than those with only one. Perhaps they know that females sharing a territory need extra help finding food for their young.

In Ireland’s Birds, published in 1900, Richard Ussher and Robert Warren wrote that the corn bunting ‘may be commonly met with on the small holdings near the coasts where the fences abound in briars’. Surveys carried out by BirdWatch between 1968 and 72, for the BTO/IWC Atlas project, showed that the bird had disappeared from most of the country. There were still a few areas, mainly coastal, where it was still found. The Mullet peninsula, I remember, had a healthy population into the 1970s. Nowadays, with the bunting’s demise, the place seems sad and empty. When the Atlas survey was repeated 20 years later, there were only 30 or so breeding pairs left in Ireland.

Watson has monitored the bird in Scotland, one of its last remaining strongholds in these islands, for the last 20 years. The Aberdeenshire population, he says, fell from 134 pairs to 12 during the period. But what is causing the decline? Watson blames the usual suspects; pesticides and changing farm practices. He also implicates another one; the amalgamation of small fields into larger ones.