by Séamus SweeneyPosted on January 3, 2019

Another review of mine from the departed nthposition.com. I quite enjoyed this from Robert Pogue Harrison. And  I am now even further along my immersion in the “dull adult world”, ten years later.

Gardens: An Essay on the Human Condition 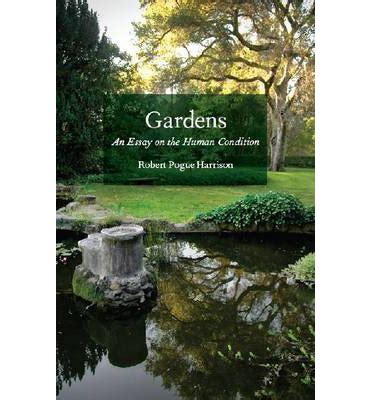 In adolescence, gardening seems to embody the dull adult world. Why waste time weeding and pruning and mowing when you could be listening to some angry young band or other convince you that the world is there for the easy changing, or wrapping you in a comically soggy blanket of miserabilism? As you get older gardening begins to gain some appeal, though if you need some convincing of the value of it Robert Pogue Harrison’s book is invaluable.

Harrison is the Rosina Pierotti Professor of Italian Literature at Stanford University, and has previously written on forests and on graves. He is poetic, digressive, discursive – with some respect for the sciences of botany and horticulture, but ultimately siding with poets (especially female ones).  “When it comes to speculation about origins we would do better to credit the intuition of poets rather than the conventional wisdom.”

Harrison begins with Voltaire’s injunction at the end of Candide  that “Il faut cultiver notre jardin” and ends with Firmin in Malcolm Lowry’s Under The Volcano haunted in his alcoholic despair by his own mistranslation of a sign encouraging us not to destroy este jardín  on a neighbouring municipal garden. Firmin believes the sign is really a statement of threat, and one of Harrson’s themes is the Western perception of life as being all about force and purpose. We are “driven but aimless” in his conception, and he writes well and passionately about our times of goal-setting and to-do lists but of nothing beyond narcissism to do.

Harrrison rather grudgingly gives us a note on Versailles, which for him is incarnates “highly refined vice…The cultivation of envy, spite, pride or greed does not transform those vices into virtues: on the contrary, by submitting them to extremely regimented rules and protocols, it gives them a style that renders them sublime while leaving their vicious essence intact.” The majesty of Versailles is exactly that, majesty, and for Harrison the vast scale and order of the place incarnate a certain evil.

He writes of the magic gardens of Gilgamesh and the Garden of Eden, ideal pleasure gardens perhaps but ones which humankind could not bear for very long. Think of Odysseus desperate to leave Circe’s idyll. For Harrison, humanity was shaped by Care (personified in an ancient fable as moulding and naming humanity) and needs to exercise Care to achieve fulfillment. Gardening is the epitome of care taking –  all gardeners are constant gardeners. The Czech author Karel Capek (who coined the word “robot”) is a particular favourite. His “The Gardeners Year” is the source of some of Harrison’s most impressive and thought-provoking reflections. For Capek, before becoming a real gardener, “a certain maturity, or let us say paternity, is necessary” – in youth, one “eats the fruits of life which one has not produced oneself” and one believes a flower is “what one carries in a buttonhole, or presents a girl with.” The gardener is concerned with long time, with the future in the broadest sense.

Gardens and thought are closely related. A garden can be the most exciting place in the world, a place suspended in time, away from the world and yet part of the world. For Harrison, a garden should not be isolated from the world around it, for to be a “still centre of the world” requires the tension that comes from the presence of the world. He writes about Plato’s Academy, a garden for training future leaders, and contrasts it with Epicurus’ Garden School with its principled “idiocy” or withdrawal from public life and competition, and cultivation of gardening and friendship.

We read of princely gardens intended to embody state power, of university gardens, of Japanese gardens, of the convent gardens profaned by Boccacio’s heroes, of the gardens of the homeless in New York City. The book is wide ranging, allusive, and erudite, but it is not authoritative or definitive. There is no Montaigne, or Shakespeare. There is no Garden of Forking Paths. Harrison deals with monastic gardens incredibly briefly and dismissively. His big ideas are at times fascinating, at times tendentious. He devotes much energy to suggesting that the faultline between Islam and the “west” is partly due to the specificity of the Islamic conception of paradise as a pleasure garden of fulfillment, versus the vagueness of the Christian, which may indeed involve further yearning. More profitable is his use of Orlando Furioso as a key text to understand the chaotic nihilism of modernism.

We stray quite far from the garden in the later pages of the essay, and one is relieved to get back to the firm earth. If the gardener is opposed to anything, it is to nihilism. The garden is life-affirming because of its very insistence on care and need for care. Care is what makes life worthwhile, and in Harrison’s reading it was Eve who agitated to get out of the Garden of Eden because everything there was provided all too easily.