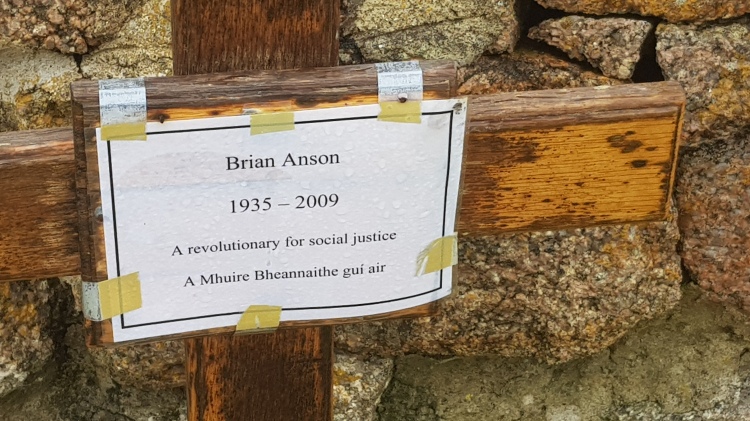 In Mahgeragallon cemetery, where my father, uncle, maternal grandparents and maternal great-grandparents are buried, I came across the grave of Brian Anson. It is beside eight commonwealth war graves (three of which are unidentified)

The inscription describes Anson as “a revolutionary for social justice” – the Irish words below mean “may the blessing of the Virgin Mary be on him.”

I had not heard of Anson. The first link I found was an obituary from The Guardian by no less than Richard Rogers:

The architect and planner Brian Anson, who has died of a heart attack aged 74, was tireless in his battles for the rights of those whose problems others overlooked or thought insurmountable. He was driven by a profound understanding of, and sympathy for, the underdog.

He was born and brought up in Bootle, the docklands area of north Liverpool. It was a tough area in tough times, yet Brian saw how humour and solidarity kept the community together. He was educated at Bootle grammar school and went on to study architecture at Manchester University. He worked as an architect and planner in Liverpool and Dublin in the mid-60s, then arrived at the Greater London council in 1967 as a deputy principal planner for the Covent Garden design team. He later recorded his efforts to save Covent Garden in the book I’ll Fight You for It, published in 1981.

More information on the Gweedore connection is provided at this Indymedia page:

He was invited by the community of Gaoth Dobhair, Donegal to propose suggestions for the retention of a culture and a language under siege by inept planning authorities. A dossier was published, outlining coherent plans for future development. It was a plan which had grown from the roots of the community and despite having a lack of the Irish-Gaelic language, Anson portrayed a deep and profound understanding for the people and their history, with a future full of hope. He envisioned a community that would become self dependent over time, utilising and mobilising it’s innate skills and practices. It was rejected however, as being far too radical

The blog Contested Territories, the academic blog of Paul Bower, has several fascinating pages on Anson, with a focus on his work in the Divis Flats in Belfast:

Brian Anson, the Northern Ireland conflict and Wallace and Gromit.

Revolution Begins in the Basement

and one which I think I will reblog shortly:

“We should sing the Land Song again”

Finally, here are some more images of Anson’s grave, which hopefully give it more context in the graveyard (and in the wider landscape) 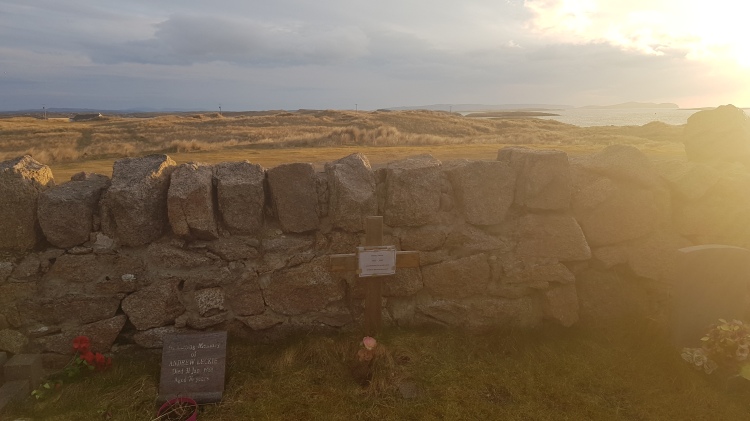