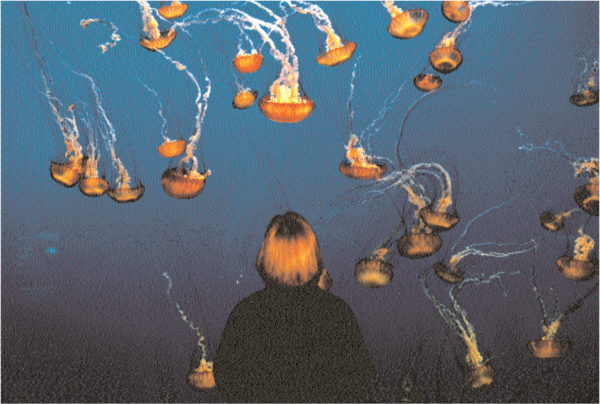 The Roughly Daily blog links to a piece on an aquarium boom apparently taking place in America. :

Aquariums are currently all the rage. Of the forty-one American aquariums accredited by the American Zoo and Aquarium Association in 2003, more than half opened since 1980, sixteen since 1990 alone.These are not traditional halls of fish tanks but huge, immersive environments with increasingly exotic fish in ever more realistic habitats: live coral reefs, artificial currents, indoor jungles, and living kelp forests. Massive public/private endeavors, the new breed of aquarium has flourished in an era of ambitious urban renewal aimed at reviving derelict inner-city waterfronts. Their prominent role in such schemes has caused the Wall Street Journal to dub the last two decades “the age of aquariums.” We are in love with looking at fish. But why?

A while back I came across a poignant aside in a TLS review on the role of home aquaria for isolated men in tower blocks:

“Social isolation is treated as a fact of life. Women living on higher floors with young families repeatedly lament the fact that they cannot let their children out to play, and often that they don’t see people other than their spouses or children from one day to the next. Several people – usually men living alone – comment on the role of home aquaria in providing quiet company and relieving stress.”

Finally, a study of the potential benefits of aquaria in a rather unexpected setting.