One of the most memorable books I reviewed for nthposition. I have written before that time has modified some of my judgments, usually tempering enthusiasms a little. The years since have not, I think, changed the relative positions of Einstein and Freud all that much in the intellectual firmament. Here’s an article on their 1927 meeting from a Slovene website… 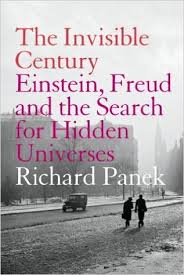 The first thing that surprised me about this book was that it existed at all. Richard Panek, who has been a science writer for the New York Times and Esquire, has written an exciting, fast-paced account of how Einstein and Freud, the two Jewish titans who would be expelled from the pure corpus of Aryan science by the Nazis, exploded our view of ourselves.

For while Einstein’s status as a demigod of science is unchallenged, despite some carping biographies and his refusal to accept the possibility that God might play dice, Freud is barely regarded as a scientist anymore. Einstein has become the archetype, the literal icon (what a pity that wonderful word icon is now so grossly overused, describing footballers and 10-day wonder pop singers) of 20th century science. The title of one of the many books written decrying Freud alone point to his loss of status, ‘Freudian Fraud’, epitomises many people’s feelings about Freudianism. At best a waste of time, at worst a sinister quasireligious pseudoscience – this is the widespread view of Freudianism.

Freud has been steadily attacked over the 66 years since his death. As his papers and correspondence have continued to be published, ethics questionable by the standards of any day and a cavalier dogmatism have become documented. As psychiatry and clinical psychology become more and more driven by the need to be “evidence-based” and the concomitant drive for efficiency, the long-term treatment that is psychodynamic psychotherapy is often derided as a timewasting “therapy for those with deep pockets”, the ‘YAWIS’ (young, attractive, wealthy, intelligent, successful)

Thus, to encounter a book which treats Einstein and Freud as equals is something of a surprise. Panek deals well with the many and varied criticisms of both. However, the general tone of the book is one of admiration. These men revealed the hidden universes of relativity and the unconscious, proving the truth uttered by Hamlet that “there are more things in heaven and earth than are dreamt of your philosophy, Horatio.”

Panek begins with the one and only meeting between Freud and Einstein, during the New Year’s Holiday season of 1927. Freud was staying with one of his sons in Berlin, and Einstein called on him. As Panek writes, “Freud and Einstein shared a native language, German, but their respective professional vocabularies had long since diverged, to the point that they now seemed virtually irreconcilable.” Freud wrote to a friend afterwards that “he understands as much about psychology as I do about physics, so we had a very pleasant talk.”

This meeting is the starting point for six breathlessly exciting chapters. It is one of the best explications of Einstein’s thinking in a historical context that I have read. The story of the exhaustion of late-19th century physics is well-known; the apparent belief that all that could be known was known suffuses the physics of the day. The difficult, daydreaming Zurich patent clerk would change all that.

What is less well remembered is how deeply it was felt in neurology and psychiatry – from today’s perspective, disciplines nascent in extremis – that the end of psychology was in sight. With a good enough microscope, the brain would yield up its secrets as easily as the rest of the body had once anatomy began to proceed in a scientific manner. The French mathematician Pierre-Simon de Laplace wrote in the late 1700s that “an intelligence knowing, at a given instance of time, all forces acting in nature, as well as the momentary position of all things of which the universe consists, would be able to comprehend the motion of the largest bodies of the world. Nothing would be uncertain, both past and future would be present.” Laplace’s idea was taken up not just by physicists grappling with the mechanics of the “largest bodies of the world” but by the new psychologists also.

Panek traces the development of 19th century neurology, its splendid achievement in identifying so many neuroanatomical and indeed neurocellular structures, and its corresponding failure to achieve a Laplace-like understanding of the mind. The neuron was not the end of psychology. Freud, it is often forgotten, trained as a neurologist and always claimed a rigorously scientific worldview. Seeing himself as a researcher first and foremost, he was forced to take up lucrative clinical practice to support his wife and family. This practice would be the research that secured Freud’s fame – or infamy – forever. He began to explore the defence mechanisms of the people who came to consult him, their resistance to exploring certain topics or to express certain thoughts, and that very resistance became the stuff of what psychoanalysis would become.

Panek tells his story superbly. The chapters rattle by. Freud once wrote that the years of struggle, in retrospect, are the ones that fill a man’s heart most, and both of these parallels lives are dominated by the years of (relative) obscurity. This is perfectly proper in a book about the ideas of these two men rather than their lives, and makes a refreshing change from some scientific biographies that concentrate at great length on the later, public figure, and skimp over the early breakthroughs that made the subject worthy of attention in the first place.

Einstein’s relativity and Freud’s unconscious are revealed as the pivotal events in, not just science in the general sense, but in our own understanding of ourselves. Even if you are utterly dismissive of Freud and all psychoanalysis, or in the less likely circumstance that you are utterly dismissive of Einstein and all relativity, I urge you to continue your argument with this book.