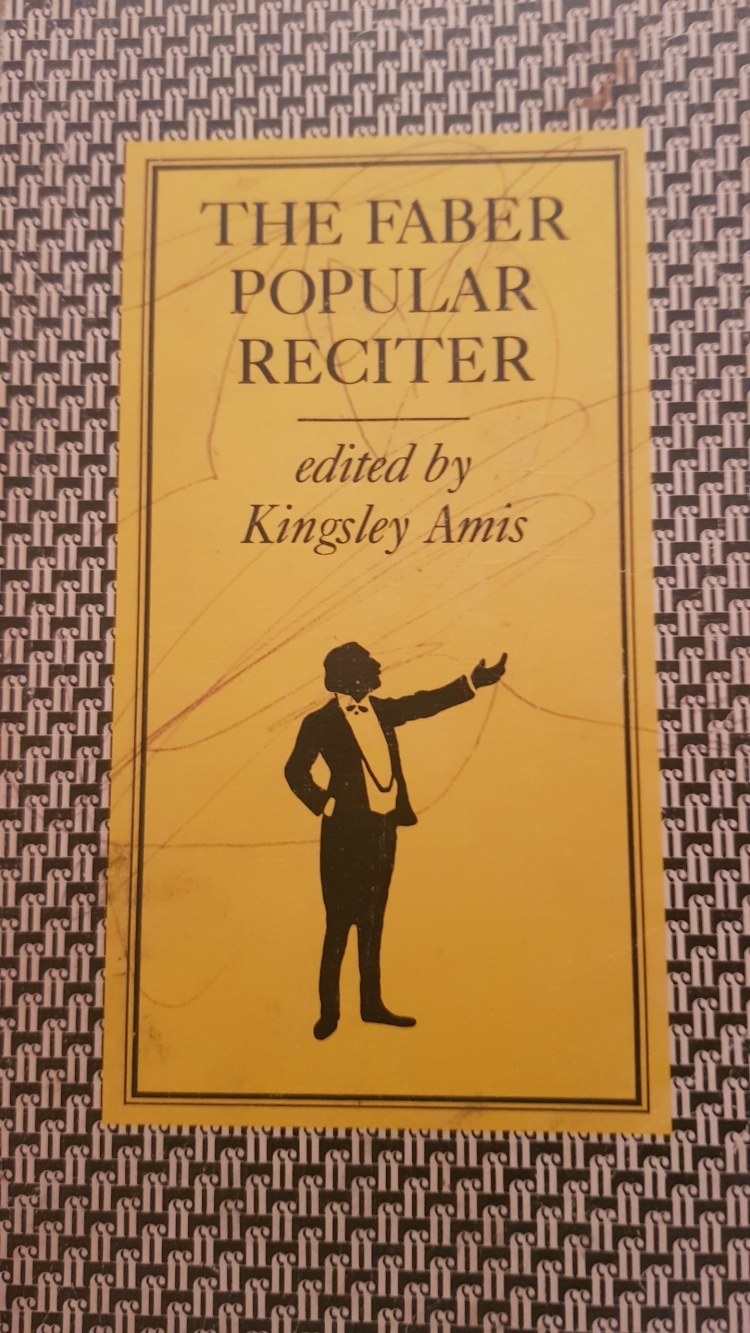 In a letter of 12 August 1977 to Robert Conquest, Kingsley Amis wrote:

The Faber Book of Non-Trendy Verse has been easier and is going faster: a careful look through the Dict of Quots took me most of the way, then hymnals and old-fashioned anthologies.

“The Faber Book of Non-Trendy Verse” is The Faber Popular Reciter, edited and introduced by Amis (the “Dict of Quots” is the dictionary of quotations; obvious to most readers no doubt, but I was initially thrown!) Here is the blurb, which along with the Conquest letter quote, gives a good sense of the thing:

I have never quite taken to Martin, but the elder Amis is an interesting figure. I previously noted his judgments, too easy to dismiss as crustily reactionary, can be surprising. “Stanley and the Women” contains, amongst other things, one of the best, most realistic and least sentimental portrayals of schizophrenia in a novel. Anthony Powell commented of him that “his hatred of pretension was itself a form of pretension.”

His introduction to The Faber Popular Reciter is a splendid, at times tendentious, always interesting little essay in its own right. There are few poems I can think of since the 1930s that could possibly be considered recitation pieces in Amis’ terms (as opposed to poetry reading performances) – perhaps Heaney’s “Mid-Term Break.” As the book is out of print and I cannot find any trace of this introduction online, I have taken the liberty of reproducing it in full below.

The book itself is a splendid collection of splendid, and very non-trendy (to the degree they may have a trendiness of their own again) poems. There are five Wordsworth poems, despite Amis’ words below. There are two Yeats, the Lake Isle of Inisfree which I would expect and Easter 1916, which I wouldn’t (I would have thought The Second Coming, or The Ballad of Father Gilligan, or many others, were more recitation pieces…. but a terrible beauty is born is a great phrase I suppose)

When I was a schoolboy before the Second World War, the majority of the poems in this book were too well known to be worth reprinting. If they were not in one anthology they were in a couple of others; they were learned by heart and recited in class, or performed as turns at grown-up gatherings; they were sung in church or chapel or on other public occasions. Some were set as texts for classical translation, an exercise that gives you insight hard to achieve by other means: the fact, noted by my fellow and me, that Mrs Hemans’ ‘Graves of a Household’ went into Latin elegiacs with exceptional ease encourages a second look at that superficially superficial piece.

Most of that, together with much else, has gone. I suppose hymns are still sung here and there, classical verses written and – another way of gaining insight – poems learned by heart and recited. But in any real sense the last could only happen in school, as part of an academic discipline. Any adult who commits a poem to memory does so for personal satisfaction; if he utters it in company he does so to share it with like-minded friends (or as a harmless means of showing off), and as one who quotes, not as one who recites.

I should be sorry, the, if readers of this book were to be confined to those in search of material for what we usually understand by recitation. ‘Reciter’ is a nineteenth-century term used here for a collection of characteristically nineteenth-century objects: poems that sound well and go well when spoken in a declamatory style, a style very far indeed removed from any of those to be found at that (alas!) characteristically twentieth-century occasion, the poetry recital, with all its exhibitionism and sheer bad art. If recitation has died out in the family circle, reading aloud has not, and it is as material for this that my anthology is ideally intended; let me remind the doubtful that here is a third way, less troublesome that the first two, of finding out more about a piece of writing and so enjoying it more. Others will perhaps be glad to have within one binding a number of old favourites now obscured by changes in taste or fashion; yet others, younger than the other others, may make a discovery, if only that poetry need be none the worse for being neither egotistical nor formless.

I mentioned just now the nineteenth century as the main source of my selection, and sure enough is drawn from authors born either in its course or so soon before as to have done the larger part of their growing-up within in, between 1788 and 1888. More than this, the pieces from longer ago are very much of the sort that the nineteenth-century poetical outlook could accept without strain: Shakespeare at his most direct, Milton on his blindness, ballads, hymns, the patriotic, the sententious (https://www.poemhunter.com/poem/the-character-of-a-happy-life/Wotton, Gray). Thus the Elizabethan period and the years immediately following contribute more than the major part of the seventeenth century, and there is one solitary poem in the Augustan heroic couplet.

No age of course has a single poetical outlook, always half a dozen. I was talking about the kind of person of that time who was intelligent and educated without having we would now call literary tastes, who liked poetry without finding it in any way a necessity and much of whose contact with it would have been through recitation and song, both sacred and profane. What our man, or woman, required is what first verse for rendering in those ways: absolute clarity, heavy rhythms and noticeable rhymes with some break in the sense preferred at the end of the line. (Outside Shakespeare, understood to be a special case, there are only two blank-verse pieces here, both by Tennyson, a different special case) Subject-matter must suit the occasion by being public, popular, what unites the individual with some large group of his neighbours. The emotional requirement is that the reader, or hearer, be stirred and inspirited more than illuminated or moved to the gentler emotions: love poetry, for instance, can often be recited effectively, but not in the course of the kind of recitation I have described. For another set of reasons, comic poetry is likewise inappropriate.

The exclusions necessitated by all this obviously exclude a very large part of the best poetry in the language, even of that written in the nineteenth century. For instance, I have felt bound to omit Wordsworth, the poet of Nature: ‘The Solitary Reaper’ gets in because it takes an untypically detached, almost a townsman’s, view of the central figure. Shelley, Browning and Arnold are among those less than fairly represented; Charles Kingsley, Alfred Austin and Austin Dobson are not greater poets than Coleridge, Keats and (Some would add) Hopkins, who are altogether left out. Perhaps popular poetry, outside the accidental contributions of poets whose critical esteem rests on other achievements, can never be anything but what George Orwell called good bad poetry.

The phrase occurs in his entertaining and valuable review-article on Kipling, whose works he describes as ‘almost a shameful pleasure, like the taste for cheap sweets that some people secretly carry into middle life’. Orwell goes on to give other examples of good bad poetry, half of which I have included here, and remarks, accurately enough on his terms, that there was no such thing until about 1790. The characteristics of this kind of poetry, he says, are vulgarity and sentimentality, though he softens the latter term by adding: ‘ A good bad poem is a graceful monument to the obvious. It records in memorable form – for verse is a mnemonic device, among other things – some emotion which nearly every human being can share. The merit of a poem like ‘When All the World Is Young, Lad’ [‘Young and Old’] is that, however sentimental it may be, its sentiment is ‘true’ sentiment in the sense that you are bound to find yourself thinking the thought it expresses sooner or later, and then, if you happen to know the poem, it will come back into your mind and seem better than it did before,. Such poems are a kind of rhyming proverb ….’ Sentiment is usually considered different from and higher than sentimentality, and an example with almost universal appeal (which is perhaps a nice way of saying ‘vulgar’) hardly seems to deserve being called bad, even good bad. Not all popular verse, again, is in the Kipling manner; perhaps that manner deserves to be called vulgar and sentimental, though to me it does not in principle, but I can find nothing of either quality in , say, ‘The Old Squire’ ‘1887‘, ‘Ha’nacker Mill’ or the poems of the Great War that close the volume. Indeed, to anyone not blinkered by political prejudice, from which category I would exclude Orwell, ‘The Soldier must surely be counted one of the greatest poems of our century.

And yet … Well, I have included ‘Horatius‘ entire; I could not bear to cut so much as a single stanza; even to glance at it in the course of preparing the book sent a thrill through me; it is probably the best and most characteristic we have of military-patriotic popular verse – in it, Rome of course has the appeal of a golden-age England, though there are English notions in the ranks of Tuscany too. And yet there is something unreal, something almost ritualized about it, not vulgar not sentimental as those words are normally applied, something not of pretence but of let’s pretend. The brave days of old belong to the time when all the world was young: this is what used to be called a boy’s poem, founded on values that are few, simple and certain. They are none the less valuable for that, and certainly none the less fundamental. The distinction of Macaulay’s magnificent poem is that it enables the adult reader, or hearer, to recover in full some of the strong emotions of boyhood, an experience which is not a lapse from maturity but an endorsement of it.

For a number of reasons, a poet of our own day cannot write like that – in fact, during the 1930s, this entire literary genre quite suddenly disappeared, never to return. Such a poet would certainly lack in the first place the required skill and application. Should he possess these, he would even so find himself using a dead style and forms. Clarity, heavy rhythms, strong rhymes and the rest are the vehicles of confidence, of a kind of innocence, of shared faiths and other long-extinct states of mind. The two great themes of popular verse were the nation and the Church, neither of which, to say the least, confers much sense of community any longer. Minor themes, like admiration of or desire for a simple rustic existence, have just been forgotten. The most obvious case of it all is the disintegrative shock of the Great War.

I thought at first of grouping the poems by subject, but was defeated by a shortage both of categories and of poems that fitted squarely into one and only one. (I should perhaps explain here to readers under forty that the generous selection of war and battle pieces is due not so much to national belligerence as to the fact that their fellow-countrymen used to feel peculiarly united at such times. The feeling persisted for some years after it had become impossible to write patriotic verse.) So – the poems are arranged chronologically instead, according to the year of their authors’ births. Although this is not a perfect plan, it has the advantage of offering a view not only of literary developments but also parts of our history. Read in this way too, some poems shed an interesting, even ironical, light on those that follow them.